From Beyond the Grave

If you're lucky, you'll have someone in your life that makes the world better. I don't mean a parent, a child, or a spouse - someone who's important to you but not necessarily in your daily circle of life. It could be a friend, a relative, whatever, just one person who delights in spending time with you and vice-versa.

For me, I had two: my grandparents, Ireland and Emma Prillhart. I was fortunate to grow up being around them quite a bit; I know several people whose grandparents died before they really got to know them, or ever met them at all. Mine lived until I was well into adulthood. My grandpa passed away when I was 23, and my grandmother followed earlier this year, my 36th on this earth. As a child, I spent a lot of time with them, as we lived directly beside of them. Afternoons were spent in their care as my parents worked, and once my grandfather retired he enjoyed having his grandkids around. He always entertained me with a song from his guitar, or by using a slingshot with pinpoint accuracy. I would roll my eyes when we would enter a store or flea market, as he would always bump into someone he knew and talk for what felt like hours to my young mind.

My grandmother, on the other hand, was a steady and reliable homemaker, and worked in a garden and the home all day long. I would spend time in the garden with her, helping gather corn and other vegetables. In the afternoons she would fix supper, and I would sit on the counter and mix cornbread and watch her tend the stove. In all my years, I never saw my grandma drive a car, work a "real job," or type on even a typewriter; at times, she would spend hours reading the Bible and endlessly writing in notebooks. I used to think she was just copying the Bible into her own hand.

My grandparents didn't have a television for most of my childhood, a decision they made when I was still young. I don't think they were any the worse for it, as there were many other things that occupied their time. In fact, without the distraction of television they were probably happier, although again, at my young age, I did struggle with the concept.

There was also my uncle Danny, the youngest of my Grandparent's five children, who was mentally handicapped and lived with them. He died a few years after my Grandpa. Although he wasn't very affectionate, he loved everyone, and we loved him. He was a big part of the time I spent at my Grandparent's house. We watched baseball at the park across the road, looked at books, played games and just enjoyed the endless days.

When I was in second grade, we had to move away, and I didn't see them as much. We moved only about 15 miles away, but it might as well have been across the country - I only saw them at church on Sundays and on special occasions. It would be about seven years before we would move again, this time to a house 2 doors up from my grandparents. I was just entering high school, and although I fell in love with computers and video games in my isolation, I was delighted to be near them again. In the summer, I would walk to their house early in the morning and spend the day driving around with Grandpa or learning to play the guitar. Sometimes I'd have some fresh cornbread and fried squash for lunch with my Grandma.

The point of all of my talking is this: my grandparents were always there for me. They loved me and I absorbed their love. It's a part of who I am. When my grandmother died several months ago, it was a very difficult time. I had the opportunity to kiss her forehead and tell her I loved her the night before she died, and I'm so very glad I did, because she told me she loved me every day of her life, not just with words, but with actions.

Recently, I've been struggling with some personal issues of depression, loneliness and worry. There's been a lot on my mind. Friday, my parents, who are preparing to move into my grandparent's house, have been cleaning out the usual papers and mementos that accumulate over the years. They gave me a stack of report cards, papers and a yearbook from my early years and told me to take them home. Thinking not much of them all, I started leafing through the papers and drawings, reminiscing of an easier time. Mixed in with all of the report cards and kindergarten drawings was a card in an envelope; inscribed on the front: 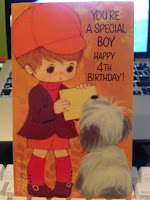 So I had to open it and read it. There, in the simplest way humanly possible, my grandparents (I assume my Grandma actually wrote & drew in the card) had reached from beyond the grave to tell me that everything was going to be all right: 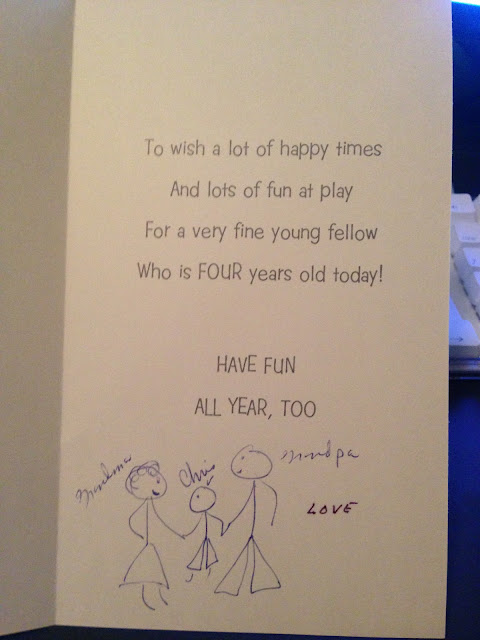 I love you too, Grandpa and Grandma. Thanks for still being there for me.